X
This site uses cookies to provide and improve your shopping experience. If you want to benefit from this improved service, please opt-in.
More Info
Accept Cookies
Trade Only Free UK Delivery over £150
1000s of products from all around the world
International Shipping upon quotation
New 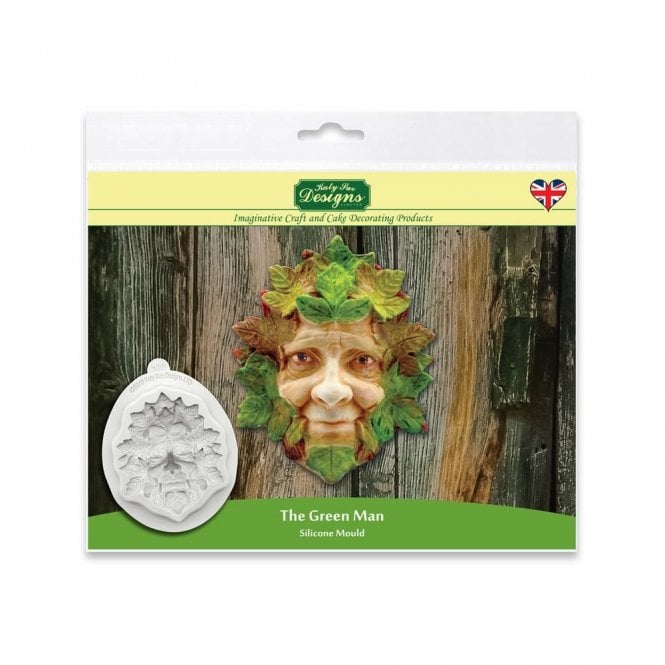 SKU: 108757
Please login to view our prices
Item(s) in Stock Item out of Stock | Usually dispatched within 24 hours
Loading...

Creating forest-themed masterpieces with the new collection from Katy Sue.

This is a highly detailed character mould of the Green Man. It’s a deep mould which would be perfect for ornamental home décor crafts or as a focal embellishment for cake decorating projects.

The Green Man is primarily interpreted as a symbol of rebirth, represented in the cycle of growth each spring. It is most commonly depicted as a sculpture or other representation of a face surrounded by, or made from, leaves.

The Green Man motif has many variations. Branches or vines may sprout from the mouth, nostrils, or other parts of the face and these shoots may bear flowers or fruit.

Found in many cultures from many ages around the world, the Green Man is often related to natural vegetative deities. Often used as decorative architectural ornaments, Green Men are frequently found in carvings on both secular and ecclesiastical buildings.

Dishwasher safe, and can withstand temperatures of up to 200°c.

For best results, lightly dust with corn flour to ease release. Use a flat firm surface to push in a smooth ball of paste. Press paste evenly and firmly into mould without overfilling. Use a rolling pin and apply even pressure to ensure all areas are full and the base is flat. Scrape away any excess paste then push paste away from the edges so that paste embellishment has a clean release.

Due to a new order management system recently implemented, we are experiencing temporary delays with some orders being dispatched. This may mean that your order is not dispatched for next day as it usually would be. We are working hard to fix the teething issues with this new system and expect that normal service will be resumed very shortly however, we please ask for your patience until then and if you have any questions regarding your order, to contact sales.

Please expect some delays. We are currently working hard to clear a backlog of international orders and apologise for the inconvenience caused. We please ask for your patience during this difficult time as we work to fulfil orders as quickly as possible. If your order is urgent, please contact our sales team at sales@cakecraftgroup.co.uk

Orders placed before 13:00 (GMT) will be dispatched same day.

Please note: This only applies to orders up to a certain size, large orders may take up to 5 days to be dispatched.

Orders placed before 13:00 (GMT) will receive a shipping quote and the order will be dispatched once the shipping cost has been paid. Shipping costs will vary depending on the size of the order and the delivery country. Delivery cost DOES NOT include import charges, customs fees or duty.

PLEASE NOTE: The minimum order value for international deliveries is £150 (ex. VAT). If the order is below this amount, no shipping options will be available at checkout.

Delivery time varies per country and the delivery services available.

We only accept returns for damaged and faulty items. Please contact your account manager who will organise a refund or replacement.